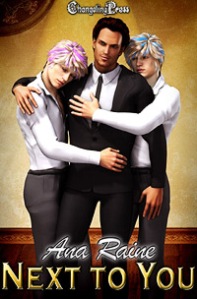 Next to You (Kline 4) by Ana Raine

Identical twins Alexei and Vasily have been fulfilling fantasies for customers of the Kline Agency for the past five years. Not only does the Kline allow them to work together, but with the money they make they are able to pay down the debt their older brother left behind.

Until the debt is paid, the brothers have pledged not to fall in love. But when a new client, Kane, requests the twins, Vasily can’t join Alexei, and Alexei goes out on his own. Alexei has to admit he is more than a little interested in their handsome new client. Keeping their pledge to share equally, Vasily goes on their second date alone, pretending to be Alexei. To his surprise, he, too is smitten.

Kane Thatcher has been looking for Vasily for more than five years. They were once lovers, though Vasily has no memory of him, due to a head injury sustained at the hands of the vicious Noch gang.

As his memories slowly return under Kane’s careful guidance, Vasily becomes determined to end their debt to the Noch Gang here and now — a decision that may cost them all more than they’re willing to pay.

“Package deal, you see?” Alexei and I chorused. My brother’s bright blue eyes were shining even in the dark room. Mine were a slightly darker blue. Despite our freckled cheeks, pale Russian skin, and blond hair, if someone really wanted to figure out which one was which, they should have been able to tell.

We didn’t limit our clients to just males, although that was our usual demographic. No matter the gender of our client, Alexei loved to dangle our sex appeal in front of them and then yank it away.

All through high school, we’d attracted the attention of men and women, which was why shortly after turning eighteen we’d started working for Lance. The money came easy and Alexei and I were never parted. But I credited him with our long list of clientele.

Just like people do in Anime during a twincest scene, Mr. Varner’s eyebrows shot up and he inhaled sharply. If I had been standing across the room, I still could’ve seen the lust in his eyes.

Instantly, he lowered his voice as he asked. “And, how much would it be to continue our time together? Say, for another hour or so?”

There was no doubt in my mind he would whip out a couple hundreds if we named that as our price.

“How much do you think we’re worth?” Alexei teased as he unbuttoned the top button of his dress jacket.

My mouth dropped and I shot him a look of fear. Rule number one, we never ever slept with a client.

“For the both of you,” he gazed at Alexei and then to me. “What one of my employees makes in a day.”

Alexei shrugged, “Vasily is right, of course. We can’t allow ourselves to be swept away, as tempting as the offer might be.”

Mr. Varner didn’t admit defeat. “Surely, I can offer a price that will make you change your mind. I can ensure both of you receive the utmost pleasure.”

Like most of the clients Lance threw our way, Mr. Varner was attractive. He had dark green eyes and the body of a thirty-year-old although he was in his late fifties.

“I’m afraid we still have to decline.” Alexei checked his watch, the one I’d gotten him for our twenty-fifth birthday, and then stood up. He reached for my arm and made sure he was the first one Mr. Varner would reach if he decided to get grabby. “I’m the only one who can see Vasily naked.”

When we first started using this line, all I had to do was look at Alexei and we would be thrown into a fit of giggles. Working on not laughing while pretending to be enamored with each other had taken time, but now we had it down to a science.

“Thank you for your time. We hope you will call on us again,” Alexei and I echoed.

Clearly Mr. Varner was used to getting his way and didn’t attempt to hide his displeasure at being refused. Not wanting to waste time in the illustrious lounge, I checked my pockets to make sure I had my wallet and keys before following Alexei to the elevator.

I watched the elevator doors close behind us and counted to ten before clearing my throat.

“What was all that about?”

Alexei loosened his tie and leaned against the wall nearest to the buttons as the elevator slowly descended the eighty floors we had to go. “What was what about?”

“How much do you think we’re worth?” I repeated sourly. “I thought we agreed to never become intimate with our clients.”

“And we didn’t,” Alexei said, before shooting me one of those breathtaking smiles that made me incapable of hating my twin. For being identical, how was it we could have such different smiles? “How long have we been doing this?”

“Don’t you ever get tired of refusing every man who comes our way? Seriously, how many guys have we fucked since high school?”

I closed my eyes. “I don’t know about you but I can count them on one hand.”

He pressed his fingers to my cheek, startling me. “What happened five years ago wasn’t your fault.”

I slapped his hand away. “I don’t want to talk about it. You promised we wouldn’t.”

“Yeah, but I worry about you not finding love. And what happened is part of the reason you push everyone away.”

Here’s a throwback song from one of my favorite tragedies from the 90s. The book I’m working on has a bit of tragedy in it (but it’s also a happily ever after, so don’t worry!) and I thought this was appropriate.

It’s the second in a series about dragons and their keepers, who communicate with one another psychically. The older the dragon, the better the communication. Things get a little dicey with the baby dragons as you can imagine.

A lot of people ask me why dragons? The answer is simple: I’m a geek. I loved Anne McCaffrey’s Pern. Dragonlance. Obscure series where the dragon was chained in the sewer and freed by a gamer who got transported to his game’s world. I love depictions of St. George and I rooted for Smaug.

Yeah. So when it came time to start a new series back when I did my first dragon books, in Elemental Ops, (Yep. They’re all related.) I knew I wanted to do companion dragons who were at once adorable and dangerous.

In DD2, I explore a new kind of dragon. Piasa is a spirit dragon. She can be corporeal or invisible, and she can talk to spirits, dead and mythological. She’s a stud, and she and her human, Mik, really don’t expect what happens when they run into Banger.

When Banger wakes up in an earthship house in the desert, surrounded by dragons, he knows his whole life has changed. Add to that the fact that the man he’s been chasing for years has a new lover, and he’s pretty sure his day can’t get much weirder. Which is when he accidentally trips trying to save his friends and shoots someone.

Mik has never been shot on a first date before. When his spirit dragon Piasa tells him to go to the little compound in the Chihuahua desert he’s expecting dragons, maybe smugglers, but he figures no one could expect Banger. Even as Mik falls for Banger, his new lover decides he’s a danger to the baby dragons he’s there to help, and Banger ends up kidnapped by a white slaver in the desert. Can Mik save Banger from danger, and keep him from hurting himself?

Available soon at All Romance Ebooks and Amazon.com

Thanks so much for having me, Sara!

Today I’m in such an oldies mood, so we’re going with this song. More news on Boo to You coming soon!

Let’s do a really romantic song with some psychedelic touches today. I’m talking Florence + the Machine’s “Cosmic Love,” of course! Here’s to some fantasy, love and tons of bright colors this week.

I’m going with a workout song since this month’s challenge is a daily three-mile walk. So far, so good!

This blog is for adults only. If you’re not of legal age in your country, you don’t have to go home but you can’t stay here.

Hard As a Rock

Nobody Rides for Free